More specificaly, the datasets are multisets, and their cardinality is the sum of the multiplicities of each value they contain.
The neighboring datasets are also multisets and are considered neighbors if the Hamming distance concerning the original dataset is of value k. The data scientist sets this parameter, but the original definition of DP has a value of k=1 (As discussed above, one considers a dataset a neighbor for a difference in cardinality of 1).

The Hamming distance can be seen as the cardinality of the symmetric difference between 2 datasets. With this in mind, the definition of DP can be written as:

Where M is a randomized computation, x a dataset, x' its neighbor at Hamming distance k = |x ⊖ x'|, and O is the output of M given x and x'.

K was first defined to be equal to 1 because one aims to protect an individual in the dataset, and by definition, any individual within the dataset would also be protected. By making the probabilities of obtaining an output o similar between two datasets that differ only by 1 record, one is successfully cloaking the actual value of o and therefore not fully updating the knowledge of the adversary.

Looking at the definition of DP, the higher the k, the more exp(·) would increase, which means that the difference between the probabilities to obtain those outputs will be larger, which is not good from a privacy perspective. Nonetheless, because ε is defined by the data curator, one may just compensate the impact of a larger Hamming distance with a lower value of ε.

The intuition behind a larger Hamming distance is group privacy. This is useful when sets of individuals in a dataset have similar qualities, e.g., a family. The individuals of these groups should be indistinguishable from other sets of individuals of the same size. For example, having a Hamming distance of k=2 would aim to protect pairs of records (pairs of individuals), i.e., it accounts for the fact that there are dependencies between records in the dataset that need to be considered, lest an output reveals exceeding information. It could make sense if there are some binary relationships between records, e.g., pairs of siblings, or n-ary relationships for k=n, e.g., in a social network.

Contributions of the notebook

I tried for different domains, bounded and unbounded sensitivities, different Hamming distances. If you are impatient, you can go directly to the results.

Note 1: Unbounded sensitivity can be achieved in 2 ways, either by adding or subtracting records. In this notebook, I computed both simultaneously and chose the one that yielded the highest sensitivity. However, I would say that in a real scenario, you could choose any and calculate the sensitivity, as both equally protect the privacy of the individuals in the records by defintion. However, it is true that for the same privacy guarantees, one might use less noise than the other. This is an object for discussion.

Note 2: Some of these conclusions have been drawn from a set of experiments, it sets the ground for hypothesis, but to assert the conclusions, we would need to prove them theoretically.

Use case and considerations

I have differentiated between 2 cases. (Their explanation have a larger impact on the understanding of DP rather than on the hereby presented notebook.)

(b) This case is similar to the previous one, but the universe of possible values is a range of values instead of a dataset. Furthermore, the adversary knows this range of possible values and the size of the released dataset. We define this second case because sometimes the exact values that could potentially be released by a data owner are not known in advance; we might only know a range where those values could fall. This scenario could be, e.g., releasing real-time DP results from an IoT device. We assume that the size of the released dataset is known, i.e., we know the adversary queries n amount of records or a synopsis (statistical summary) of these n records is released. This last statement about the knowledge of the adversary is realistic because the number of users or IoT devices in an application can be designed to be known.
For simplicity, from now on, I will call the datasets D_universe_a, D_universe_b, D_release_a, D_release_b, and D_neighbor for (a) and (b).

Note that this is somewhat different from the online (on) or interactive, and the offline (off) or non-interactive definition that C. Dwork introduces in her work. Her definitions deal with not knowing or knowing the queries beforehand, respectively. However, we could have the case (a) and case (b) in both (on) or (off):

For this notebook, I will consider Scenario (a) + (off) and (b) + (off). But for the latter I will not include dataset updates, it is out of the scope of this post.

Also, note that (a) and (b) do not necessarily need to be categorized as local DP (LDP). LDP is applied at the device level on individual data points before any third party aggregates all data points from all devices; usually, a randomized response is the DP mechanism of choice. However, one can adapt the setting so that (a) and (b) are cases of LDP. Nonetheless, in this notebook, we implement (a) and (b) as global DP (GDP) instances. GDP is applied when a trusted third party gathers all the data and applies a DP mechanism on the aggregate and not at a record level. GDP is not as restrictive as LDP in terms of allowed DP mechanisms, and the amount of noise in GDP can be lower than in LDP. This notebook focuses on GDP.

Something to note is that the functions that calculate the sensitivities only need a universe and the size of the released dataset (Together with the Hamming distance). They do not need the actual released dataset, that would be needed for calculating local sensitivities (future blogpost).

While the adversary model is not essential for the notebook, it is good practice to set up the context so that we do not lose track of why we are doing this.
The adversary model adopted is the worst-case scenario, and it will be the one I adopt for this notebook: An attacker has infinite computation power, and because DP provides privacy given adversaries with arbitrary background knowledge, it is fitting to assume that the adversary has full access to all the records (The adversary knows all the universe, i.e., D_universe). However, there is a dataset made from the universe without an individual (D_release), and the adversary does not know who is and who is not in it (This is the only thing the adversary does not know about the universe), but the adversary knows D_release contains people with a certain quality (E.g., the students who have not been in probation). With D_universe, the attacker will reconstruct the relased dataset (D_release) by employing queries on D_release without having access to the data.

If the number of users/IoT devices itself is desired to be protected, then one can take a large sample of records, but not all the records, and the cardinality considered would be the number of the sampled records.

(Ignore the decimals on the x-axis, Hamming distances are integers) 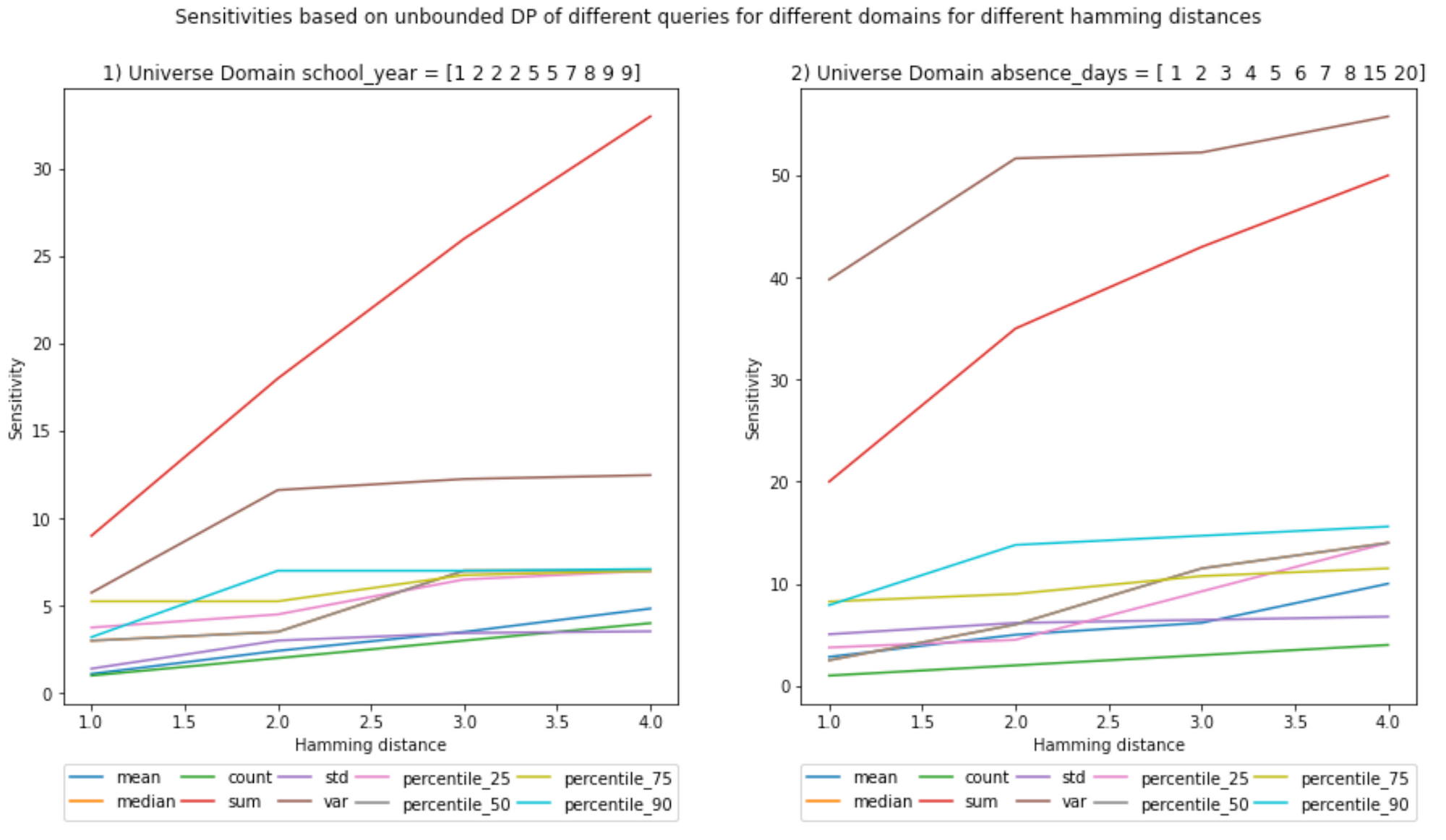 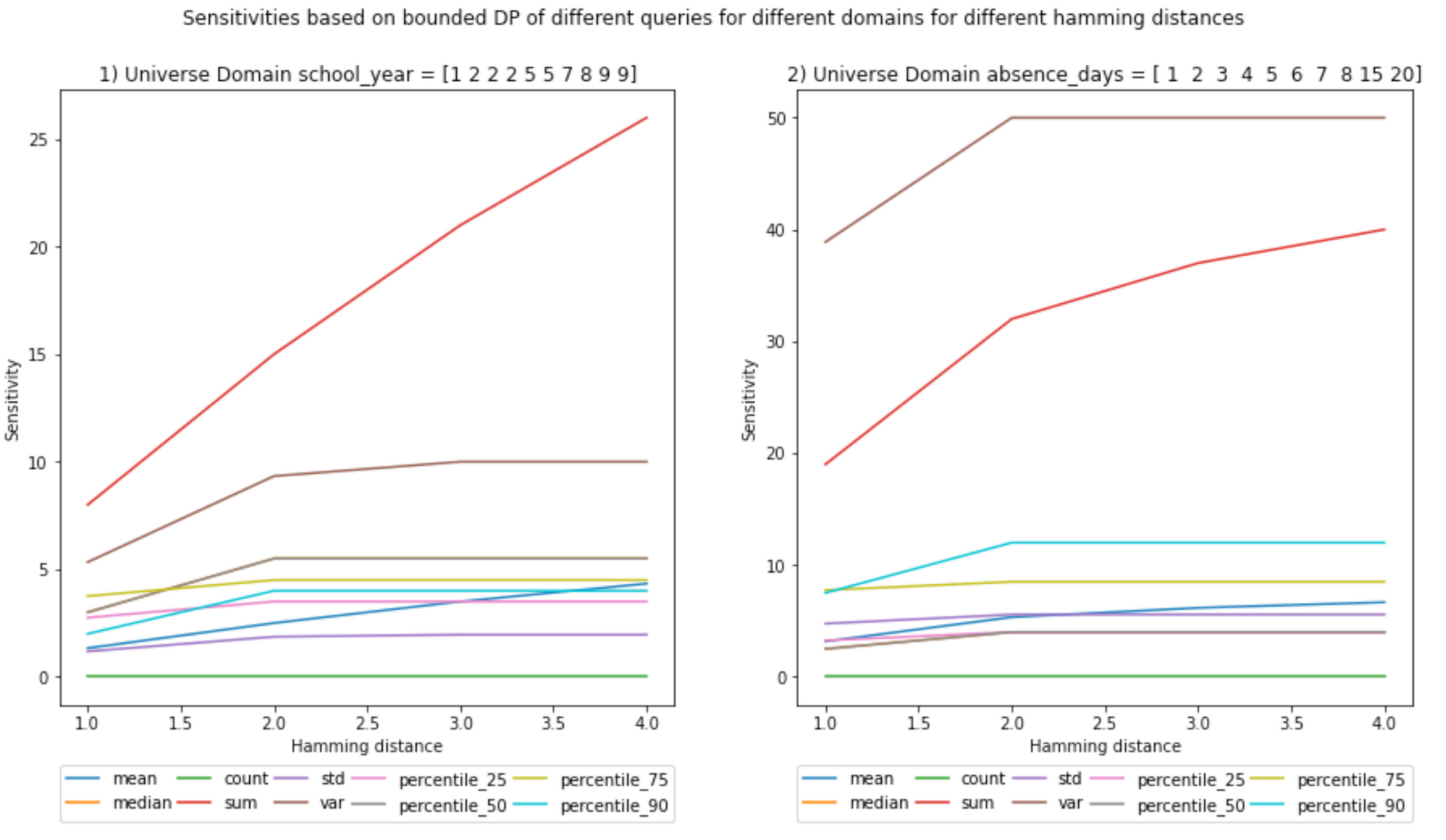 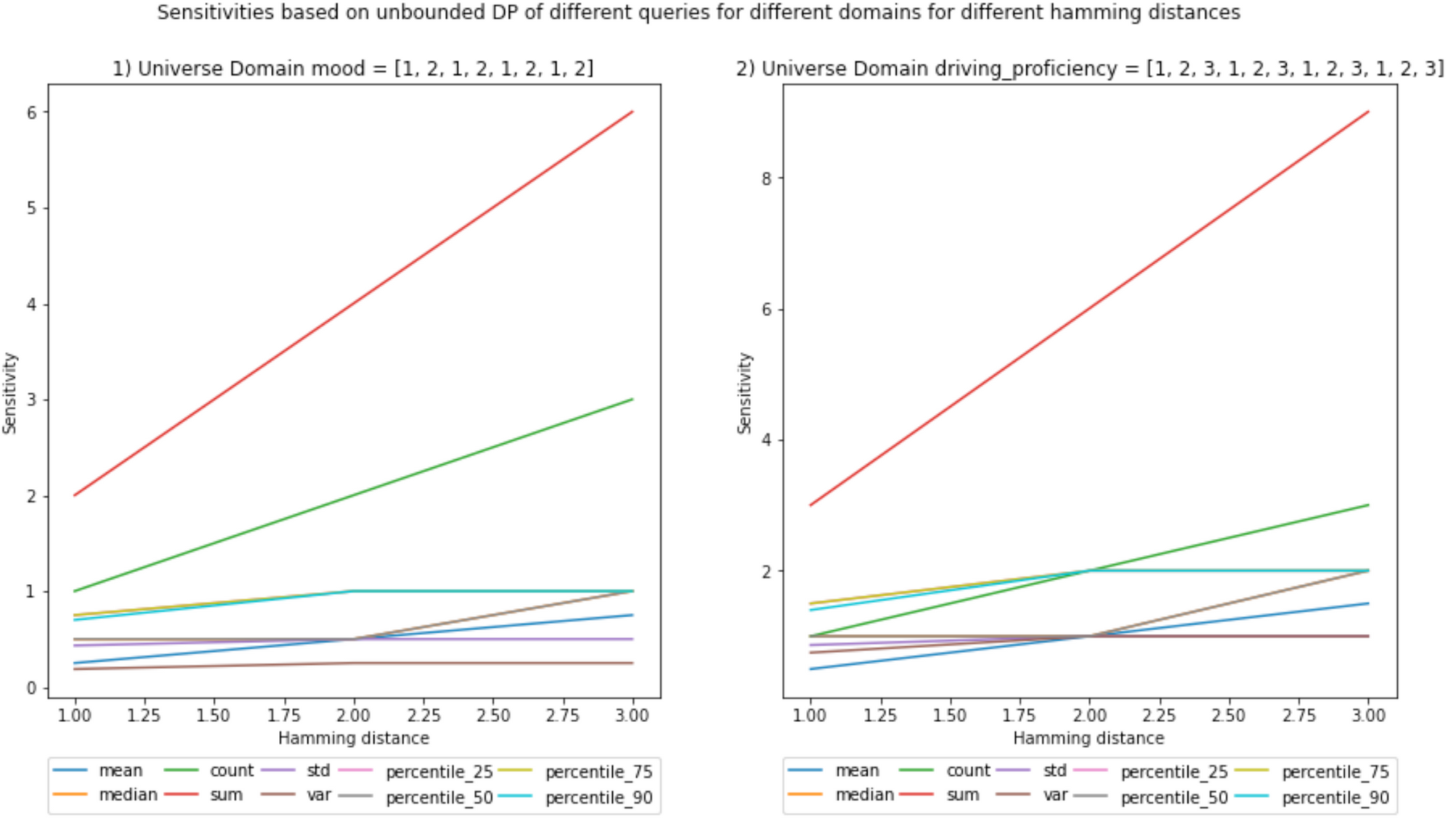 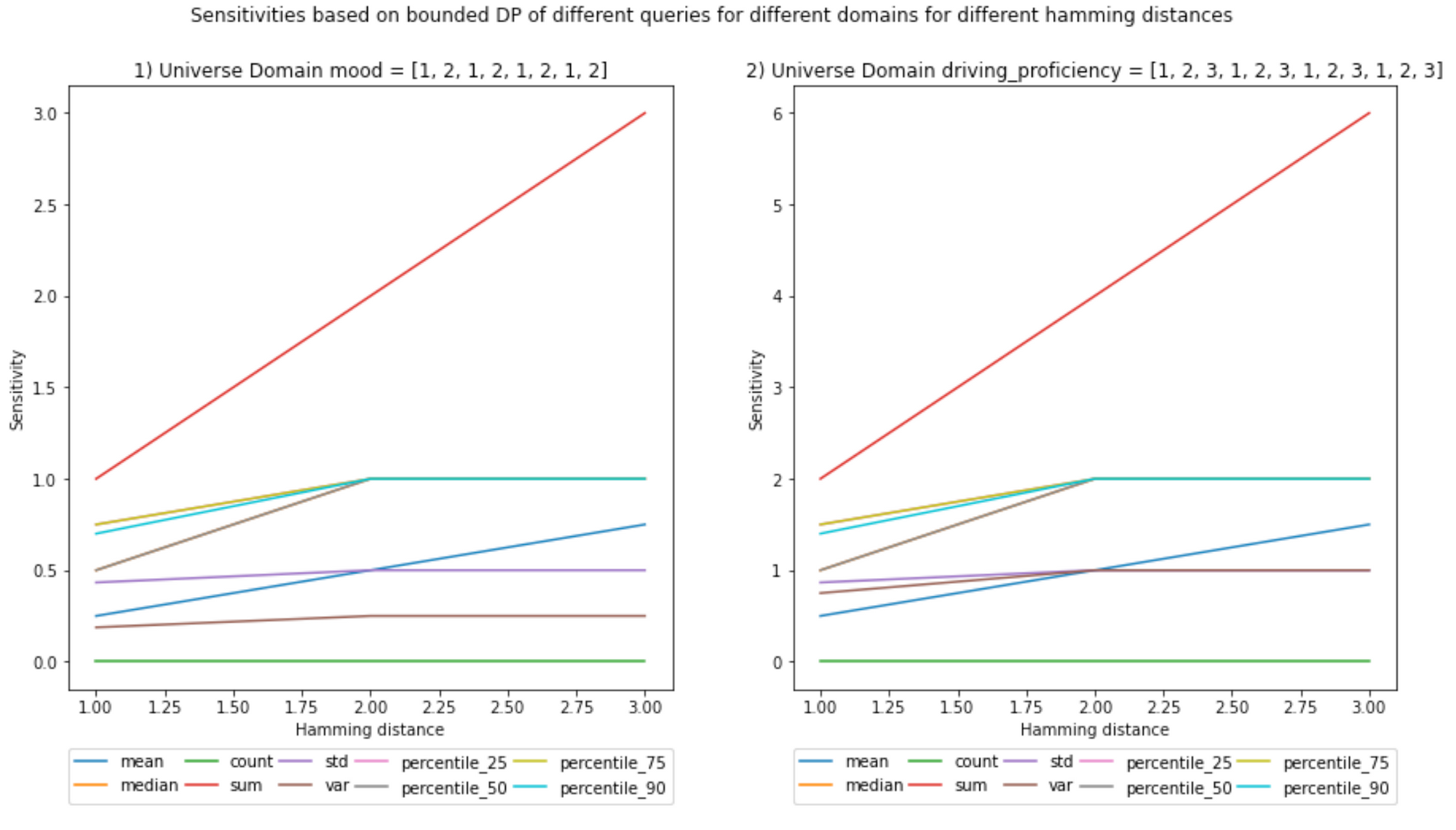 In this post we will show only the highlights of the underlying notebook. I invite you to check it out for more details.

In the notebook, I used two datasets for each scenario (a) and (b), one that is large and one that is small. In this post, I will only target the larger datasets to allow for larger than one Hamming distance. The smaller dataset is the same as one included in a paper from Jaewoo Lee et al. I implemented that paper in a previous post.  I used it as a sanity check.

The larger dataset as the universe is used in the notebook to test the functions with a Hamming distance >1. Furthermore, note that the universe has duplicated values both in the universe and the release, which does not mean they are the same records. This complicates the implementation.

And also we create the dataset that will be queried by the adversary:

There will be only one dataset for scnario b, designed to test the functions with a Hammig distance > 1. Notice that I only define the cardinality (Number of records in this case) of the release dataset and not of the universe. This is because we do not know all the values that conform the universe, we only know the unique values the data points may take from the universe.

The use case will be a vehicle sending the mood of the driver (1 - sad to 2 - happy) and how well he/she drives (0 - terrible to 3 - awesome). The sizes of the datasets are chosen so that they are not too large to compute their sensitivities. It is a computationally taxing operation because it is an empirical way of calculating sensitivity.

Now we show the core of the notebook, the functions that calculate the sensitivities of the queries. Here is for the unbounded sensitivity:

Here is for the bounded sensitivity:

Now we can visualize how the sensitivity varies with the Hamming distance. I will show the code only for the first set of plots.

(Ignore the decimals on the x-axis, hamming distances are integers)

And here are the rest of plots:

And for scenario (b):

I hope you enjoyed the tutorial, I invite you to check the notebook.

Featured Contributor a year ago